For weeks now, unspeakable violence has broken out on the streets of major U.S. cities. Acts of looting, rioting, and destruction place innocent Americans in harm’s way; yet, these disasters continue to occur night after night and on a consistent basis. 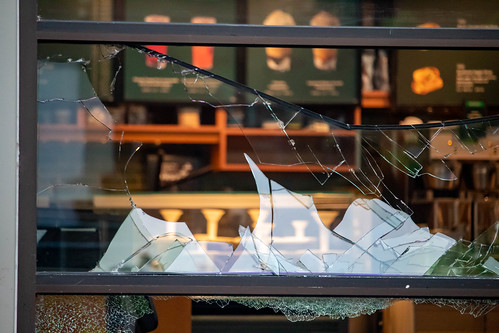 “Neighborhood Uprising” (CC BY 2.0) by dsgetch

As a result of this, the federal government has intervened. Much to the ire of Democrat mayors, federal law enforcement officers are being sent to chaos-stricken cities to restore law and order.

Needless to say, the perpetrators behind these acts of violence are not happy about the federal government intervening to stop lawlessness. This explains why Acting Department of Homeland Security (DHS) secretary Chad Wolf is being targeted by the left-wing mobs, per Breitbart News.

In the Crossfire of Violent Demonstrators

One of the cities gripping by eyebrow-raising levels of violence is Portland, Oregon. For weeks now, angry mobs have taken to the streets, destroying property and also committing a series of other crimes.

In light of this, Secretary Wolf has remained steadfast in stating that federal law enforcement officers will be sent to Portland to get the city back under control; the DHS secretary has stood by this decision, despite the left’s mistruths regarding the conduct of officers being sent into Portland.

Protesters in front of acting DHS Sec. Chad Wolf’s home in Alexandria, VA. Calling for defunding police, DHS, etc. “Whose the big bad Wolf? Is one of their favorite chants. pic.twitter.com/VQgc4uEC0j

The left-wing mobs couldn’t be more unhappy about an increase of police presence; this is why they paid a visit to Wolf’s Virginia home over the weekend. Black Lives Matter demonstrators chanted outside of the DHS secretary’s residence, branding themselves as “angry neighbors.”

Demonstrators additionally urged to defund the police and DHS while referring to Wolf as “the big, bad Wolf.”

Indirect Threats Against the DHS Secretary

As demonstrators gathered outside of Wolf’s home, they did not limit themselves to calling for the erasure of law enforcement in America.

One speaker at the protest outside of Sec. Chad Wolf’s home complains how there’s no financial, career, and legal consequences for people like him. Says there must be social/political consequences: “[Wolf] lives here quietly…and we need to do something about that.” pic.twitter.com/b47dUrKFrB

The DHS secretary was also subjected to threats; these threats specificially entailed demonstrators urging for political and social ramifications for Wolf’s decision to uphold law and order. Furthermore, as the mob gathered outside of Wolf’s private home, they did not acknowledge the violence of gatherings happening in major cities; this violence includes, but is not limited to, federal courthouses being targeted by rioters.

Secretary Wolf has made no indication of the mob swaying his decision. Likewise, the president himself maintains that lawlessness will not prevail so long as he is in office.

What do you think about the demonstrators outside the DHS secretary’s home? Also, is it time for Wolf to beef up his own personal security? Let us know down below in the comments section.