In 2018, Alice Marie Johnson made headlines after receiving clemency from President Trump. Prior to the intervention and work of Kim Kardashian West, Johnson’s attorneys, and later the president himself, Johnson was set to spend life behind bars, all for a nonviolent drug offense.

Trump’s pardon of Johnson’s sentence arrived after the latter spent 22 years behind bars. Since regaining her freedom, Johnson has repeatedly thanked the president for interceding on her behalf; she even received accolades during last year’s State of the Union Address. 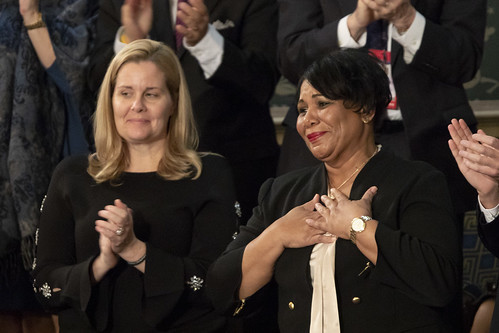 “2019 State of the Union” (Public Domain) by The White House

Last night, Johnson spoke at the GOP National Convention. During this time, the criminal justice reform advocate spoke about how President Trump changed her life by pardoning her.

Breitbart News also confirms that Johnson not only shared her own story, but also lauded Trump’s work on criminal justice reform.

During her address at the Republican National Convention, Johnson cited the “compassion of President Donald John Trump” and “grace of God” for her ability to speak before the nation. The criminal justice reform advocate also explained that the purpose of her speech was to reiterate the value of second chances, something that was given to her.

While addressing the nation, Johnson declared that honor and mercy are the pillars of “true justice.” She also stated that her work as a criminal justice reform advocate entails being a voice for others like her who deserve second chances.

Johnson then talked about her time in prison; this included her work as a playwright, ordained minister, mentor, and more. Finally, before her speech ended, Johnson also lauded President Trump for signing the First Step Act into law, merely months after he granted her clemency.

Johnson’s speech served as a major highlight of the GOP National Convention’s fourth night. Many conservatives praised Johnson for her remarks; others noted that the crime legislation that enabled Johnson’s lifetime sentence was written and co-sponsored by none other than Joe Biden himself.

This reality marks yet another contrast between Trump and Biden. Republicans didn’t miss this and took to social media to point it out.

Did you enjoy Alice Johnson’s speech at the Republican National Convention last night? Let us know in the comments section below!

Arkansas Governor Warns About “Cost” of Getting Trump’s Endorsement

Tragedy at Southern Border as BORDER AGENT Caught Up in Chase