Throughout the coronavirus “pandemic,” advice from scientists and others heralded as the experts and end-alls has lacked consistency. Back in March, Dr. Anthony Fauci declared that Americans shouldn’t be walking around with masks; the scientist even stated that face masks lack efficiency, although he’s since changed his tune.

A similar story applies to the World Health Organization (WHO). Months ago, the WHO was all on board with shutdowns and stay-at-home orders; they argued that such measures were imperative to “slowing the spread” of COVID-19. 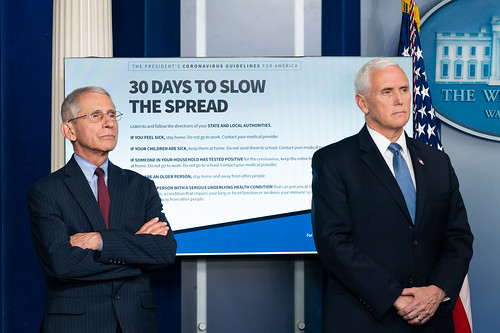 Now, just earlier this month, the World Health Organization came out and professed that lockdowns are actually dangerous and responsible for worsening the plights of poor individuals. The WHO’s current stance on lockdowns is that they should not be readily employed to reduce the spread of COVID-19.

Despite these details, some Americans believe that the scientists should be listened to and followed no matter what. However, during a Nevada rally, President Trump warned about the horrible state our nation would be in if he’d completely complied with wishes of the scientists, per Breitbart News.

The Truth About the Scientists and their COVID-19 Advice

When giving advice on how to reduce the spread of coronavirus, scientists have not considered the various impacts that their suggestions would have, namely on the economy. “Experts” like Fauci have admitted this.

Contrary to what the left may claim, the economy matters. Millions of Americans who have lost their jobs, livelihoods, businesses, mental health, etc., are paying the price of leaders blindly listening to the scientists without questions.

However, President Trump warned yesterday that America would be much worse off if he completely complied with advice of “the experts” regarding COVID-19. While in Carson City, the president noted that a “massive depression” would be present right now if he didn’t push for reopenings, even when the scientists disagreed.

The commander-in-chief then reminded Nevadans that the cure should not and cannot be worse than the problem itself.

The Political Factor of Shutdowns

President @realDonaldTrump: Under the Biden Lockdown, the Christmas season will be cancelled pic.twitter.com/YmZdGrE4Rd

It’s no coincidence that states with Democrat governors are the ones that continue to remain under strict lockdown orders. Like other Republicans, Trump stated that Democrats, at this point, are motivated not by science, but instead by politics.

The left has determined that if they continue to impose lockdown orders, it could hurt Trump’s chances of winning a second term in office.

What do you think about President Trump’s remarks on the outcome that would follow if he completely listened to the scientists? Let us know in the comments section below!