The vast majority of conservatives and Republicans are allies and supporters of President Trump. The president maintains an over 90% approval rating within the Republican Party; in addition to this, Trump’s rallies are able to pack arenas and get people to wait in line days in advance.

However, a very small minority of Republicans and conservatives do not support the president; in fact, this minority, often dubbed as the NeverTrumpers, makes it a point to oppose Trump in the most flagrant and outlandish manners, even if this involves lying. 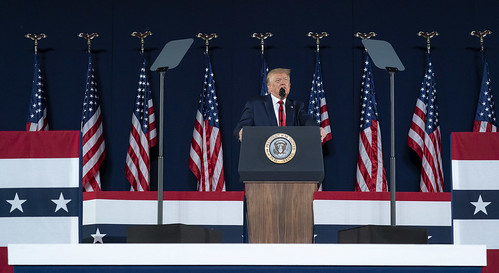 Over Independence Day weekend, an anti-Trump conservative group called The Lincoln Project posted manipulated and doctored footage of the president in order to make him look bad.

However, this move backfired when Twitter flagged the footage as “manipulated media,” according to Breitbart News.

Reviewing the Latest Lie from The Lincoln Project

The Lincoln Project is run and operated by Republicans who dislike President Trump; some of the individuals who fall into this category include Rick Wilson, George Conway, Steve Schmidt, and others.

In the “manipulated media,” The Lincoln Project pieced together segments of President Trump’s 4th of July speech. In doing so, the anti-Trump GOP group created the false appearance of the president claiming Vietnam as the location of Operation Desert Storm.

What’s wrong with the President? https://t.co/hfQiyQCdk0

In posting the clearly doctored footage, it doesn’t appear as though The Lincoln Project anticipated pushback from not only Twitter, but also other users on the platform. Aside from the “manipulated media” warning placed by Twitter, other individuals on the social media site called out the anti-Trump group.

More from The Lincoln Project

Independence Day didn’t mark the first — or last — time of The Lincoln Project going after President Trump. As a matter of fact, the entire platform of the anti-Trump conservative group is dedicated to being token GOPers who dislike the 45th president.

If the number of jobs Trump lost were a state, it would exceed the population of 37 states.

So many hardworking Americans have lost their job. Because of that, this November, we’ll make sure the president loses his.

In an ad seen above, the Trump-hating GOP group vows to ensure that the president loses the 2020 election in November.

What do you think of The Lincoln Project’s most recent lies about President Trump? Share your opinions and takeaways with us in the comments section below.