For much of Joe Biden’s time as a 2020 Democrat candidate, his team has put in work to pass off the former vice president as a moderate. Pro-Biden leftists make the case that he is the best shot of beating Trump, due to an alleged crossover appeal.

The narrative of Biden being this moderate candidate with crossover appeal continues to face pushback, however. In recent weeks alone, the former vice president has embraced and caved to certain pushes from the more openly radical progressives in his party. Some political analysts believe that Biden doing this is a necessary strategy in order to win support. 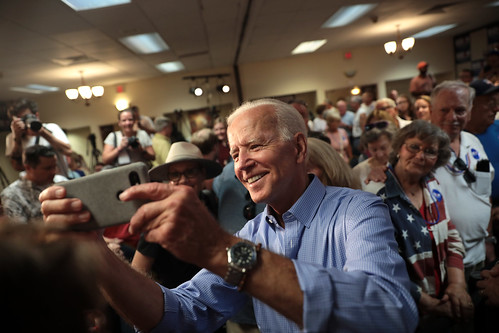 Conservatives, however, do not view Biden as a moderate candidate seeking office. In fact, many folks on the right maintain that the former vice president is being puppeteered as a smokescreen for a truly radical and socialist movement, according to Breitbart News.

Republicans who do not buy into the idea of Biden being a moderate presidential candidate are simply looking at his policies. To date, the former vice president has repeatedly aligned himself with Bernie Sanders, Alexandria Ocasio-Cortez, allowing these radicals to have a considerable voice in his policy decisions.

Sanders, Ocasio-Cortez, and others like them are on record supporting open borders, reparations, and other extreme-left policies. Furthermore, a considerable faction of the Democrat Party stands with them. With this in mind, Biden is pretty much forced to acquiesce to this part of the Democrat base in order to win support.

Contrary to Joe Biden and Bernie Sanders’ radical agenda, President @realDonaldTrump is rebuilding this economy based on freedom, free markets, and the rule of law. Their agenda is based on government control and our agenda is based on FREEDOM. pic.twitter.com/lT7Y0bzQ3e

All of these details are why Vice President Mike Pence branded Biden as a “trojan horse” for radical socialism yesterday. Pence’s remarks arrived during a speech at the Wisconsin-based Ripon College. The vice president also warned that the 2020 presidential election puts the nation at a “crossroads of freedom.”

At this time, the former vice president continues to attack President Trump in various manners. In addition to going after Trump’s response to coronavirus, Biden has also called for the president’s tax returns and repeated common, left-wing talking points about Trump.

From day one, Donald Trump has been focused on the stock market and delivering for his wealthy friends and big corporations.

As president, I will be laser-focused on working families and small businesses. pic.twitter.com/3gFMqw4nk6

Amid the national debate about reopening schools, the former vice president is in opposition to this. Pushback against reopening schools arrives in spite of studies showing that it’s uncommon for kids to transmit coronavirus; some Americans have even warned that social, emotional, and mental health of children will suffer if they aren’t back in school.

Do you believe that Joe Biden is a “trojan horse” for bringing socialism to the White House? Let us know down below in the comments section!