Throughout the 2020 presidential election, Joe Biden has faced backlash for taking an almost-hidden approach.

Critics of the former vice president speculate that his team is attempting to keep him secluded from the press. Last week, both Biden and Harris notably dodged questions at a news conference after calling for a three-month minimum, national face mask mandate. 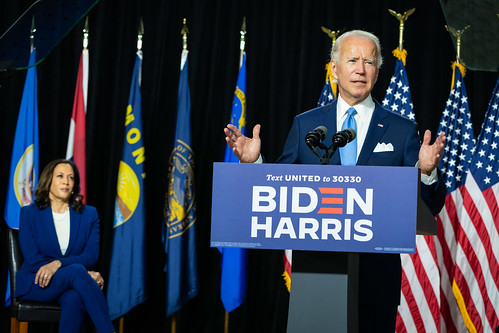 “Announcement of Senator Kamala Harris as” (CC BY-NC-SA 2.0) by Biden For President

While this year’s election continues to play out, Biden is still working to have as few direct interactions with the press as possible. The former vice president’s campaign also seems to be adopting a similar approach; this explains why Biden or anyone from his team has yet to schedule interviews.

Already, this approach is earning Biden criticism from the media itself, as documented by Breitbart News.

A Lack of Interviews from the Biden Campaign

Unlike Joe Biden, President Trump has engaged in countless media interviews since the inception of the 2020 presidential election. In addition to campaign interviews, Trump also maintains a visible presence in front of reporters during various White House press conferences.

Biden is declining to take this approach, even with the approaching Democratic National Convention. This is something that Fox News host Chris Wallace criticized on Friday during an appearance on the Guy Benson Show.

Wallace noted the historic pattern of political campaign putting out representatives (prior to the conventions) to speak about their goals and interests ahead of time. Apparently, Biden has no plans of doing this, something that Wallace branded as “the d*mnedest thing [he’s] ever seen.”

Finally, the Fox News host questioned what Biden is seeking to accomplish before hitting the former vice president’s refusal of “serious interviews.”

Biden in His Delaware Basement

Within recent weeks, reports have surfaced of Biden’s plans to take a laid back, defensive approach to the 2020 presidential election. The former vice president’s aides apparently believe that such an approach will reduce his likelihood of making various gaffes and humiliating himself.

Repeatedly dodging the media will proceed to hurt the former vice president as this year’s election carries on. Barring select events, the American people are objectively seeing much more of President Trump than they are of his election rival.

Finally, Trump supporters and conservatives have questioned how Biden plans to run the nation when he seemingly cannot handle unfiltered interactions with our nation’s own reporters.

What do you think of the lack of interviews from Joe Biden’s presidential campaign? Let us know in the comments section below!