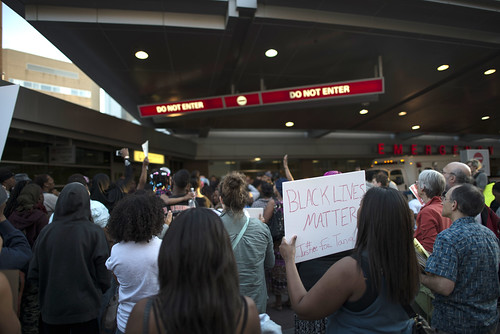 “Black Lives Matter protest in support of” (CC BY 2.0) by Fibonacci Blue

What to Know About the Murder of Secoriea Turner

The murder of the 8-year-old occurred on Saturday night after Black Lives Matter demonstrators unleashed fire into a moving vehicle.

This incident occurred when Secoriea’s parents attempted to move past unlawful barriers blocking a street in Atlanta. Sadly, yet ironically, this happened near the Wendy’s where Rayshard Brooks died after attacking police and stealing a taser.

Secoriea’s murder also occurred on the same night that demonstrators attempted to burn down the Georgia State Patrol Building.

Statements from the Atlanta Mayor

Yesterday night, Atlanta Mayor Keisha Lance Bottoms condemned the shooting and killing of the 8-year-old. The Atlanta mayor also noted that the death of Secoriea cannot be blamed on law enforcement officers. Bottoms stated that black Americans are currently doing one another “more harm than any officer on this force.”

"They say Black Lives Matter. You killed your own." Secoriya Williamson, father of 8-year-old Secoriea Turner, addressed the public during a press conf. today after his daughter was shot and killed last night while riding in a car w/ her mother in Southeast Atlanta. @11AliveNews pic.twitter.com/odowRbSXsq

Secoriea’s parent’s also delivered statements after Mayor Bottom’s remarks. The late child’s mother and father noted that their daughter did nothing wrong. They also condemned the shooters who affiliated themselves with Black Lives Matter yet “killed [their] own.”

Some Americans have criticized the Atlanta mayor for a permissive stance towards Black Lives Matter demonstrators. Critics argued that Bottoms shouldn’t have allowed demonstrators to set up illegal barriers in the streets of Atlanta; they also pointed out that the mayor’s order for police officers to “stand down” in certain areas ultimately enabled the death of Secoriea.

What do you think about Mayor Bottoms’ management of the city of Atlanta? Do you think allowing Atlanta police officers to do their jobs would have prevented the death of Secoriea Turner? Let us know in the comments section below!