For months now, Americans have listened to and heard the advice from coronavirus task force Drs. Anthony Fauci and Deborah Birx. Both of these individuals have rallied behind closures, shutdowns, and face mask orders.

Fauci, a bit more so than Birx, has earned the ire of conservatives for repeatedly shifting gears on major recommendations that are impacting people’s lives and abilities to support their families. However, Birx is right there with Fauci, even if she’s not in front of the spotlight as much. 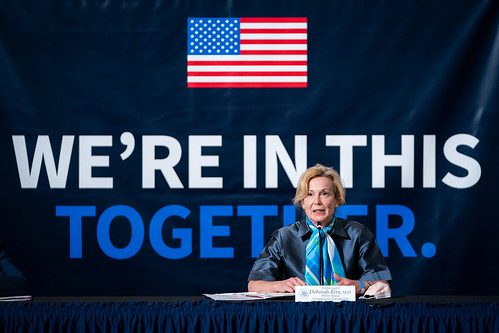 No one can deny that the advice from both coronavirus task force doctors has impacted so many lives. Many businesses that were open six months ago are now permanently closed. Millions of people across the nation have also lost their jobs, health insurance, and economic stability, due to leaders following the advice of Fauci and Birx.

This is why both doctors are now being urged to “exit stage left,” according to Washington Examiner.

The Case for Firing Fauci and Birx

Since his time in the national spotlight, Fauci has given congressional testimony on multiple occasions. During at least one of these times, the COVID-19 task force doctor admitted that he’s “not an economist” and has therefore not thought about the economic consequences of keeping America shut down.

Dr. Fauci and Dr. Birx have cased more damage to this nation with their COVID-19 prescriptions than can ever be restored. Their policies and solutions do not value and protect ALL lives.

Our future depends on these two exiting the stage immediately. https://t.co/1hbozdHtHh

Economic consequences stemming from Fauci’s advice are alive and well, however. This is why GOP Arizona Rep. Andy Biggs is urging for the removal of both Fauci and Birx. In an op-ed, the conservative representative pointed out the countless devastating impacts that have followed from the advice of Fauci and Birx.

Just some of many examples of such devastating impacts include the following: business shutdowns, increased rates of child abuse, domestic violence surges, millions of unemployed Americans, etc.

Rep. Biggs has also criticized Fauci and Birx for supporting a seemingly indefinite shutdown of schools for children.

Can Our Nation Recover?

Rep. Biggs and many other likeminded individuals believe that America’s recovery will ultimately depend on reopening while still taking measured precautions.

Conservatives continue to speak out against endless lockdowns and ceaseless government handouts, both of which Fauci, Birx, and Democrats seem to favor.

Conclusion: Lockdowns don’t work. Sweden looks to be done with Covid-19. Protect vulnerable and as for everyone else, wash your hands, be smart, move on. https://t.co/c0iAondvD4

Ultimately, the recovery of the United States will mean getting people back to work, reopening schools, decreasing the power of government in folks’ lives, and allowing Americans to make their own healthcare decisions.

Do you believe President Trump should fire Drs. Fauci and Birx? Has their advice brought about more good or harm to the United States? Share your thoughts with us in the comments section below!