Throughout the 2020 primary election, Democrat had a series of options for potential nominee picks.

Of all the choices, the Democrat Party collectively and ultimately went with Joe Biden. Despite the name recognition that Biden gained over the eight years of Obama’s presidency, he’s still repeatedly made blunders while speaking to Americans. 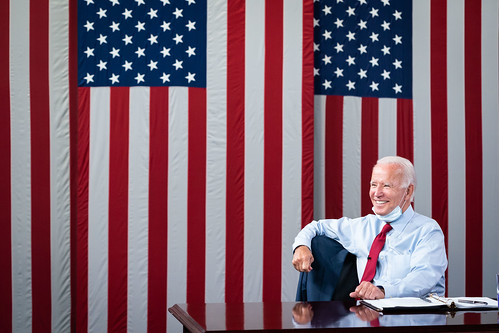 “The State of the Economy Briefing – Wilm” (CC BY-NC-SA 2.0) by Biden For President

Throughout the 2020 presidential election, Biden has also thrown shots at the president every chance he gets. Some of the former vice president’s most common talking points mirror those of the radical left.

However, on Tuesday night, Democrats still officially chose Biden as their party’s nominee to square off against President Trump in the general election, according to Washington Examiner.

A Closer Look at the Democrats’ Nomination of Joe Biden

Biden’s nomination arrived after he won approximately 2,690 delegates from various primaries and caucuses.

In the hopes of booting Trump from the White House, Democrats have fully rallied behind Biden. Multiple speakers at the Democratic National Convention last night sang the former vice president’s praises and talked about how lovely they think he is. Democrats even managed to get some speeches from anti-Trump Republicans like failed 2016 candidate John Kasich.

It is the honor of my life to accept the Democratic Party's nomination for President of the United States of America. #DemConvention

The Democrat Party’s official nomination of Joe Biden arrives after the former vice president has shifted to the radical left on certain policies. Defunding the police, a Green New Deal, and socialized healthcare are merely the tip of the iceberg.

Candidly, Joe Biden is far from the moderate Democrat that his campaign has attempted to paint him as.

Battling it Out in the General Election

As Joe Biden accepts the Democrat Party’s nomination, President Trump and his re-election team are more than ready for the battle ahead.

The former vice president continues to be slammed for his policies, rhetoric, and behaviors that indicate cognitive regression. Moreover, the media is noticing the Biden campaign’s tendency to shy away from interviews; just last week, Fox News host Chris Wallace described this policy as the “d*mnedest thing.”

The #DemConvention has shown us that the Democrats don't stand for anything except radical socialism.

The Democrat Party "is a party that's as broken as Biden's brain." pic.twitter.com/2CIUB1UGB3

Political pundits have already reported that the former vice president plans to take a back seat, defensive approach to the general election. Meanwhile, President Trump will be out and about; he’ll continue traveling across the nation to campaign before the public, not from a basement in Wilmington, Delaware.

What do you think of the Democrat Party’s decision to nominate Joe Biden? Are you excited about the general election? Be sure to share it with us in the comments section below!