At this time, riots, crime, and destruction continue to break out in multiple cities across the nation. Only very recently have Democrats begun to abandon the false notion that such acts are displays of “peaceful protest.”

Despite certain left-wing figures, such as Joe Biden, coming out and begrudgingly condemning acts of violence, they’re still attempting to pass the buck. For instance, Biden himself has gone after both the president and his supporters, while refusing to denounce attacks on police. 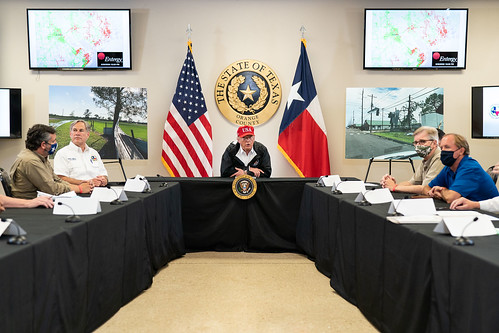 “President Trump in Texas” (Public Domain) by The White House

The presence of crime, riots, and destruction is at an all-time high in Democrat-run localities. For this reason, certain Americans have come to the conclusion that the Democrat Party is incapable of controlling its own base, confirms Fox News.

Why Democrats Have Lost Control over Their Own Party

During an interview with Fox News’ Sean Hannity, first son Donald Trump Jr. torched the hypocrisy of the left. The eldest child of the 45th president noted that breaking into a store during a riot comes with less severe consequences than a business owner reopening to feed their family.

After declaring that Democrats have allowed the radical left to get out of control, Don Jr. slammed the policies of Joe Biden. Citing the former vice president’s support for NAFTA, TPP, etc., Don Jr. explained that Biden essentially handed American jobs over to the Chinese government.

Seems like a legit question that an honest media would be asking… but who are we kidding at this point? https://t.co/28r86Zfnki

Not only did the first son go after the left’s allowance of riots and Biden’s policies, but he also censured the former vice president’s mental stability…or lack thereof. Don Jr. explained that Biden is the radical left’s “sock puppet” and fails to “remember where he is” half the time.

In 2020, the Democrat Party’s ultimate objective is to ensure that President Trump doesn’t win a second term in office. However, as riots break out across the nation and as Joe Biden hides in his basement, more Americans are coming to the conclusion that the re-election of the 45th president is on its way.

Just last week, Hollywood celebrity and leftist activist Michael Moore warned about high levels of enthusiasm for Trump, levels that Biden simply doesn’t have. In a lengthy Facebook post, Moore also alleged that Democrats could very well be “outsmarted” by the president yet again this election.

Do you believe the Democrats have completely lost control over their own party? Be sure to let us know in the comments section below!