Members of the United States Congress remain in a political impasse as it pertains to another COVID-19 stimulus package for Americans.

Right now, Democrats are deadset on ensuring that the aid includes $600 per week payments; however, Republicans favor $200 per week in addition to other provisions that will assist schools, small businesses, and other institutions. 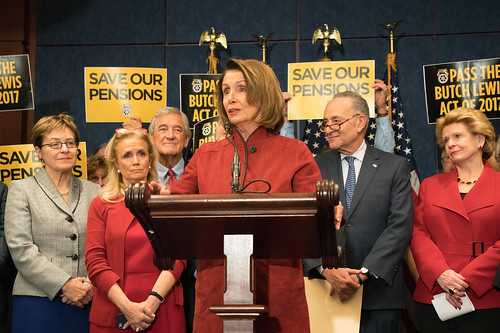 As the deadlock continues, Democrats are going after the GOP, stating that the latter doesn’t “trust” Americans with unemployment aid. Last week, Speaker of the House Nancy Pelosi even declared that Republicans are “begrudging” struggling workers by refusing to agree to Democrats’ terms.

However, another perspective on the matter indicates that there’s more than what meets the eye regarding stimulus aid, per reports from Breitbart News.

Trump on the Partisan Impasse About Coronavirus Stimulus Aid

Yesterday, President Trump informed that he’s engaged with the congressional talks regarding stimulus aid for Americans amid coronavirus. In doing so, the president also informed the nation of Democrats’ true motivations for stalling negotiations and refusing to meet Republicans in the middle.

Apparently, the talks about a stimulus package have also triggered conversations about federal bailouts. This means that Democrats are working to pull strings so that leftist-controlled communities like Portland, Chicago, and others are able to get money from the government to fix their dilapidated cities. Needless to say, Republicans aren’t biting and this infuriates the Democrats.

That's not COVID relief. It's Pelosi's No Liberal Cause Left Behind Act. pic.twitter.com/2xmuNt73tQ

The president additionally stated that House Speaker Nancy Pelosi and other Democrats are purposefully “slow-rolling” conversations in the hopes of getting what they want. While the GOP has put forth several offers, Democrats in Congress have rejected all of them and offered zero alternatives of their own.

Will Democrat-Run Communities Get Federal Bailouts?

Many city and state leaders within the Democrat Party have expressed interests in federal bailouts. These leftists mayors and governors make the case that coronavirus ravaged their communities and that having the federal government assist them is only fair.

Democrats need to quit playing politics with additional #coronavirus economic relief and get serious at the negotiating table.

However, what Democrat leaders won’t acknowledge is their decisions to repeatedly ignore advice from the Trump administration, prolong shutdowns, and allow socialist mobs to ravage communities. These remain very important issues, to date; moreover, many of the same leftist leaders seeking federal bailouts threw hissy fits when the president sent in federal troops to get crime under control.

The president has consistently maintained that the aforementioned areas run by Democrats should not expect federal bailouts.

Do you believe Democrats are stalling negotitations regarding COVID-19 aid in order to get federal bailouts for failed, leftist communities? Let us know down below in the comments section.