Today, the American people will go to the polls and vote on whether or not they want four more years of President Trump or a Joe Biden presidency.

The 2020 presidential election has been intense, high-paced, and very emotional. Tens of millions of Americans showed up at record numbers to vote early; some voted early in person, while others voted absentee or by mail. 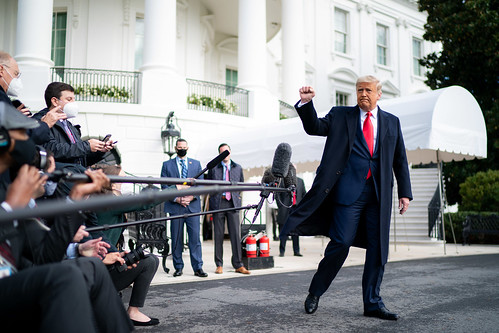 Yesterday, President Trump held his final rally of the 2020 presidential election in Grand Rapids, Michigan, confirms Breitbart News. The Grand Rapids rally went off without a hitch and took place after the president already hosted four other rallies earlier in the day.

The Final Trump Rally of the 2020 Presidential Election

While in Michigan, the president vowed to keep the American Dream alive, despite Democrats’ work to destroy it with shutdowns, high taxes, crushing regulations, and more.

Trump also acknowledged the immense enthusiasm of his base, paying homage to the “100 miles of cars” that show up for him across the nation with “the American flag, the Trump, the whole Trump thing.”

In his final, pre-election pitch to the American people, Trump stated that while Biden is a “career politician” who doesn’t even like the folks he wants to vote for him, Trump is “an outsider” who remains committed to fighting for this nation and its citizens.

Vice President @Mike_Pence: You can bet that Joe Biden will lock down the country if he makes it to the White House pic.twitter.com/f6iyRfOImS

Touting the growing “economic powerhouse,” the president noted the statistic showing that 56% of Americans feel better off now than they were in 2016. During Trump’s time in Michigan, he also covered matters relating to fracking, Second Amendment support, backing the blue, reducing regulations, decreasing taxes, and more.

According to some polls, the president is ahead of Democrat rival Joe Biden in Michigan. Trump won Michigan back in 2016 and throughout the 2020 presidential election, Trump, Vice President Mike Pence, and first family members campaigned in Michigan multiple times.

Vice President @Mike_Pence: For everything that has always made America great, we must reelect President @realDonaldTrump for four more years! pic.twitter.com/BQrpqAMmE5

While rallying in Michigan last night, the vice president also joined Trump and shared some remarks before the passionate crowd of Trump supporters. Pence warned that if Biden manages to weasel his way into the White House, he will absolutely shut down the country again and send Americans into a backward spiral.

Do you think President Trump will win Michigan’s electoral votes and the 2020 presidential election? Have you voted already or will you be voting today? Let us know down below in the comments section.