Less than one week remains until the 2020 presidential election comes to its conclusion.

With this year’s race being down to the wire, the Trump campaign and Biden campaign are each using the time left to make their cases to the American people. 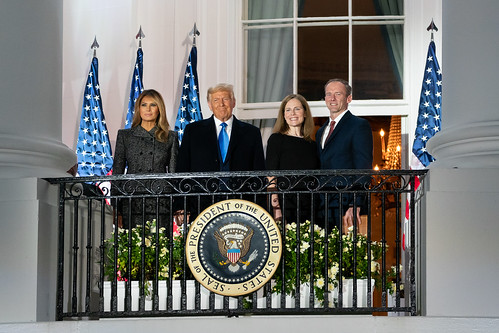 Just earlier this week, President Trump spent time in Nebraska and Wisconsin; Biden, on the other hand, traveled to the conservative state of Georgia for an event that generated next-to-no turnout.

Yesterday, Trump supporters were in for a treat though. On Tuesday, first lady Melania Trump traveled to Pennsylvania and delivered a detailed speech about the 2020 election, reports Breitbart News.

What to Know About the First Lady’s Speech

While in Pennsylvania, Mrs. Trump talked about several elements of the election: her husband’s policies, the policies of Joe Biden, Democrats, the liberal mainstream media, etc.

The first lady drew attention towards the inception of coronavirus’ arrival to America, noting that earlier this year, Democrats strictly focused on the impeachment sham. Before slamming Democrat presidential candidate Joe Biden, Trump criticized the “display of hatred” that is consistently present from folks who oppose her husband.

First Lady Melania Trump: For the first time in history, the citizens of this country get to hear directly and instantly from their president every single day through social media pic.twitter.com/bJzitP8UwN

When the first lady moved to Joe Biden, she criticized his political record; before specifically remarking about the decades that Biden spent in politics with nothing to show for it, Trump slammed his socialist policies. The first lady then noted Biden’s initial opposition against shutting down travel from China amid COVID-19’s advent.

On the same day that Trump addressed the nation, the former vice president wound up traveling to Georgia in hopes of flipping the Peach State blue. Not only did Biden generate less than 40 event attendees, but Georgia Governor Brian Kemp (R) also slammed his visit.

Now, I know that @JoeBiden is in GA today but I’m not sure why. Maybe he wants some good BBQ & southern hospitality or maybe he needed to get out of his basement & taste some freedom. But if Biden is down in GA looking for electoral votes, he’s come to the wrong place! #gapol pic.twitter.com/aRc2qtP5Bj

Kemp stated via social media that if Biden traveled to Georgia with the intention of winning electoral votes, he wasn’t in the right place. Kemp, like other Republicans, remains a close ally of President Trump and has campaigned in Georgia on Trump’s behalf. On October 16, the Georgia governor spoke at the president’s Macon rally.

What did you think about Melania Trump’s speech in Pennsylvania? Do you believe Joe Biden stands a chance of winning the 2020 presidential election? We want to know your thoughts about what’s left of the election in the comments section down below!