Coronavirus and the subsequent lockdowns have prompted debates about the importance of work in America.

While most Republicans are eager to gradually get back to work in a measured and thoughtful manner, Democrats couldn’t be less interested. Pelosi and other Democrats have proven this by stating that the government should endlessly hand out checks to Americans, rather than allow Americans to get back to work. 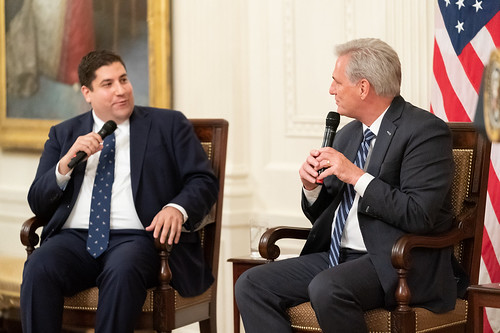 “The Social Media Summit” (Public Domain) by The White House

The left’s disregard for work is also apparent in their own behavior in Washington. House Minority Leader Kevin McCarthy (R) has put together a plan for the lower congressional chamber to get back to work; however, House Speaker Nancy Pelosi (D), along with other members of her party, refuses to consider the plan.

Leader McCarthy on the Essence of Congressional Work

During his press conference yesterday, McCarthy pointed out that Congress is essential; the Republican Leader also stated that similarly to other essential workers across the nation, the House of Representatives must get back to work.

This is not the House Minority Leader’s first time speaking out about the imperative nature of getting House members back in Washington. Earlier this month, McCarthy and other Republicans issued and shared a detailed plan on how the House can return to work without increasing the risk of contracting COVID-19.

.@GOPLeader McCarthy blasts House Democrats for the fact that Starbucks is open but they won’t let Congress get back to work. pic.twitter.com/VpTlw0QbwR

How much longer do you think Democrats will drag their feet before working with House Republicans to re-open the lower congressional chamber? Sound off in the comments section below!