In many regards, the promotion of face masks has become akin to beating a dead horse.

At this point, Americans know where they stand on the mask debate. Some are all for face coverings while others are strongly against them. The former group is already wearing masks, whereas the latter is doing all that’s possible to steer clear of face coverings. 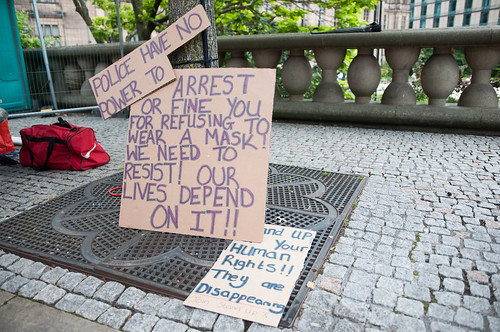 Endless mask promotion is not changing any minds; however, certain individuals in politics remain determined to do so anyway.

The Latest Chapter in the Mask Debate Saga

While speaking with Trump supporters at the Dayton International Airport, Husted attempted to put a new spin on masks by tying them to pro-Trumpism. The Ohio lieutenant governor encouraged attendees to wear pro-Trump face masks as a means of working to save the nation.

The campaign has thrown @LtGovHusted into the awkward role of promoting masks. Shouts of “Tyrant!” “Not gonna work!” & plenty of booing.

DeWine/Husted have pushed masks for months.

Husted: “you’ve made your point,” “hang on, I get it” and trying to pivot to pro-Trump rhetoric. pic.twitter.com/FVKKSnsHYP

Needless to say, Husted’s attempts to liken masks with support for Trump didn’t go over well. The Ohio lieutenant governor later tried to appease the crowd, but that didn’t work either. Trump supporters quickly let Husted know what they thought of him; shouts of “tyrant” and “not gonna work” quickly followed his talking points on mask promotion.

Ohio Governor Mike DeWine (R) has also promoted and mandated face masks; this has not done him any favors amongst conservatives. In fact, Trump supporters also booed upon hearing the Ohio Republican’s name from the president.

The Politics of Masks

Mandating face masks in different parts of America has only intensified the debate and strong emotions regarding this issue. Many folks across the nation take issue with the government demanding that individuals cover their faces; some have pointed out that when you give your rights away, they won’t come back on their own.

Lt. Governor Jon Husted (R-OH) tries to promote pro-Trump masks at today's rally … and is met with a huge chorus of boos. pic.twitter.com/1rR1bAwF89

Ultimately, the talking points which accuse non-mask wearers of selfishness and stupidity are not sticking. Critics of mandatory masks furthermore maintain that such edicts are unconstitutional. Conservatives who favor small government have also noted that governors do not have the power to demand and enforce masking, even if they issue statewide “requirements.”

What do you think about the Ohio lieutenant governor’s attempt to promote masks under the guise of Trumpism? Is promoting masks at this point even worth it? Let us know what you think down below in the comments section!