President Donald Trump and Michigan Governor Gretchen Whitmer (D) have repeatedly butted heads over the course of this year.

The Democrat governor of Michigan continues taking heat for her response to COVID-19 and decision to issue draconian mandates; only after the Michigan Supreme Court struck down the 1945 emergency powers law did Whitmer stop ramming through broad, tyrannical orders. 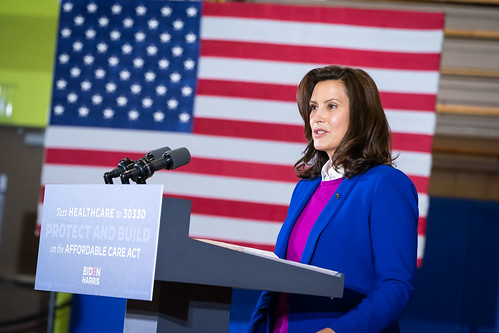 “Remarks on Healthcare at Beech Woods Rec” (CC BY-NC-SA 2.0) by Biden For President

Despite the issues happening in her own state, Whitmer continues to go after President Trump. She’s criticized his decisions to host rallies and even blamed him for a militia group’s unsuccessful plot to have her kidnapped and murdered.

Now, in ongoing attacks against the president, Whitmer is putting out the untrue narrative that remarks from Trump have engendered hate crimes, according to Breitbart News.

The Michigan Governor vs. Reality

During a CNN interview, Governor Whitmer complained about Trump supporters at a rally chanting for her to be put in prison. The Michigan governor cited the event as a “dangerous moment” before claiming, without basis, that “hate speech,” antisemitism, hate crimes, and intolerance have surged over the past four years.

Whitmer then seized the moment to endorse Joe Biden yet again. According to the Democrat governor, Biden is the president who will help everyone “come together as a nation.”

Governor Gretchen Whitmer displayed an "86 45" sign during her TV appearance.

86 can be shorthand for killing someone.

Whitmer is encouraging assassination attempts against President Trump just weeks after someone sent a ricin-laced package to the White House. pic.twitter.com/GzvtrjH40A

Finally, the Michigan governor went on to say that she and other governors who have passed sweeping mandates are just looking to save lives. While on CNN, Whitmer declined to talk about the serious economic and mental health issues resulting from lockdowns.

Since President Trump’s first term in office, multiple leftists have come under fire for staging hate crimes. Racist graffiti painted on cars and buildings has turned out to be self-perpetrated by the individuals who reported the “crime.”

Likewise, several anti-Trump left-wingers have lied about getting beaten up, targeted with racial slurs, etc.; look no further than actor Jussie Smollett.

Wow! This is big. Brandon Caserta, one of the ringleaders of the group of men arrested for a plot where the group planned to kidnap Gov. Gretchen Whitmer, hated President Trump too!

"Trump is not your friend dude"

He says Trump is "a tyrant" & calls President Trump an "enemy". pic.twitter.com/T5paEeTkiJ

Whitmer’s claim about a rise in hate crimes and other forms of bigotry simply doesn’t add up. If anything, more and more Trump supporters are the ones under attack; over the past four years, viral footage has surfaced of people spitting on, beating up, and attacking Trump supporters.

Of course, though, the Michigan governor didn’t mention this while speaking with CNN’s Anderson Cooper.

What do you think about Governor Whitmer’s continued attacks against President Trump? Should she focus on reopening her state first? Let us know what you think down below in the comments section.