Throughout this year, Democrats have regularly criticized President Trump for holding rallies and directly addressing the nation.

During the height of coronavirus, the president did, in fact, reel things back and adopt a more virtual means of campaigning. However, as the nation reopens and resumes everyday, normal life, the Trump rallies are following suit. 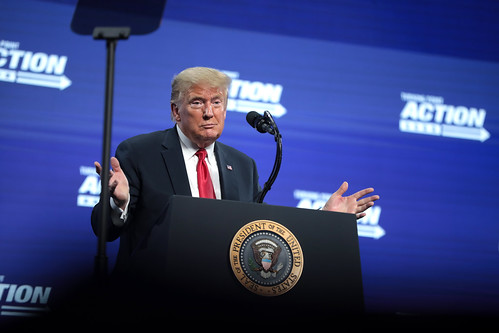 The left isn’t happy about this, though. Believe it or not, Democrats know that the president’s unfiltered and candid means of communication serve him well.

This explains why the governor of Michigan is attacking President Trump’s decision to rally and reach Americans, reports Breitbart News.

The Truth About Opposition Against Trump Rallies

The presented reasons behind opposition against Trump rallies greatly differs from the true, underlying reasons.

President @realDonaldTrump lists his goals for a Second Term pic.twitter.com/CFaQJqKugA

Whitmer has not, however, made similar statements about gatherings in the streets during riots or the destruction of cities. The Michigan governor also has yet to criticize the House Speaker or New York governor, both of whom were recently caught maskless after promoting face masks for everyone else.

Ultimately, the Michigan governor’s complaints about Trump rallies arrive as multiple polls show Biden losing support. As Trump beats out the former vice president in various states, the latter seems to have retreated back to his basement in Delaware.

The countless, back-to-back riots that have happened in America for months now have weakened Democrats’ arguments about masks and social distancing. Seeing various left-wing public figures tout face coverings only to later go without them also isn’t doing Democrats any favor.

McEnany: "As you can see, we found Nancy Pelosi going into her hair salon. We will be playing the video on loop…" pic.twitter.com/S8wYs5d5nM

Many Americans believe that if people can gather in the streets to loot and set small businesses ablaze, then they can gather for a Trump rally. Likewise, Americans maintain that if Nancy Pelosi can get her hair blown out at a shuttered salon in San Francisco, then other businesses can also resume operations.

The Michigan governor’s complaints are largely falling on deaf ears as this nation’s citizens observe myraid inconsistencies and double standards. In fact, Trump will hold a rally in Michigan tomorrow!

What do you think about the criticism towards Trump rallies? Is it valid? Will you be attending a Trump rally near you? Sound off down below in the comments section.