New York City continues to remain in significant trouble. Crime is surging, amid the city’s bright idea to defund the police and make it harder for law enforcement officers to do their jobs.

As the city succumbs to ruination, New York City Mayor Bill de Blasio has fully embraced Black Lives Matter. As most Americans know, Black Lives Matter is a Marxist organization that is responsible for countless acts of destruction, vandalism, assault, and even murder. 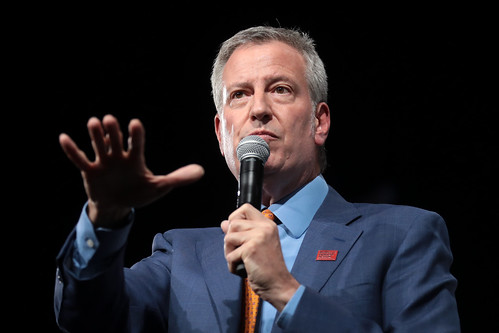 Despite the chilling reality of New York City’s very present plight, the Democrat mayor is attempting to paint a different picture and suggest that all is well.

The Truth About New York City

Between New York City’s defunding of police, ongoing shutdowns, and crime hikes, what was once an amazing community is now in serious trouble. Despite these documented facts, the Democrat mayor appears to be living in an alternate reality.

On Sunday, De Blasio urged New York City residents go out and enjoy themselves…while keeping six feet apart from others and wearing face masks, of course. Thankfully, it didn’t take long for President Trump to chime in with a healthy dose of reality.

But people don’t want to get mugged, beaten up, or killed. Let New York’s Finest (who proudly endorsed me!) do their job. Rehire crime squad and fired police. They will bring safety back to NYC, FAST!!! https://t.co/u14t0oSNVN

Trump explained that thanks to De Blasio’s poor leadership, New York City folk are at a greater risk of being robbed, assaulted, or even murdered. The president then suggested that the New York City mayor solve these problems by bringing back the New York crime squad and previously-terminated police officers.

At this time, the New York City mayor has yet to indicate that he’ll take any real action to bring an end to local dangers and problems.

The Plight of Democrat-controlled Cities

New York City is far from the only leftist-run community facing issues with crime. Atlanta, Kenosha, Chicago, etc., are just a few examples of how Democrats’ leadership has led to the decimation of various communities.

My daughter wanted a trip to NYC for her sweet 16th birthday next year. We likely won’t be making that trip now and it has nothing to do with Covid. It has to do with the lawlessness that you’ve allowed to rule the streets. I no longer feel safe in your city.

The riots that have broken out across the nation continue to draw attention to some very real issues in cities run by Democrats. Moreover, as Americans deal with shutdowns while receiving government handouts, it is more difficult and less motivating to get back to work. Having swarms of jobless individuals doesn’t bode well for communities or for the nation’s economy.

Sadly, though, Democrats continue to point their fingers at President Trump and assert that he is the true problem.

What do you think about the many difficulties facing New York City? Let us know down below in the comments section!