Violence continues to break out in Portland, Oregon, much to the dismay of many Americans.

Outbreaks of violence and crime maintain in Portland for weeks now with Black Lives Matter and AntiFa at the forefront of destruction. Worse yet, the environment has turned especially dangerous for police officers who have had bricks, fireworks, and other dangerous items hurled at them. 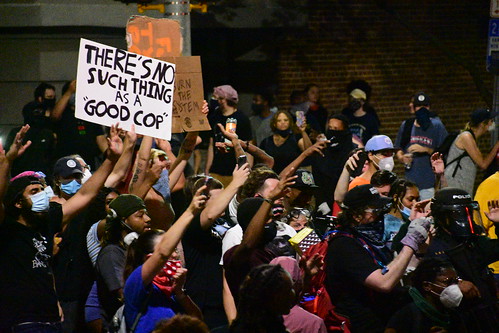 Over this weekend alone, Portland violence reached new heights as graphic videos of destruction made the rounds on social media. However, responses to the violence are already prompting very different reactions from Republicans and Democrats, confirms Fox News.

Video footage captured Portland rioters attempting to break into a federal courthouse and engaging in other acts of destruction. Many of the violent participants wore face masks and ambiguous clothing, complicating the process of identifying them. During this time, various onlookers also cheered the acts of vandalism underway.

The 50th day of violent protests in Portland.

Amid such choas and crime in the city, federal agents were called upon to arrive in Portland and shield federal property. However, Democrat leaders in Oregon have made clear that they don’t want law enforcement presence in the area.

Worse yet, when police intervene to stop acts of violence, Democrats called them “stormtroopers” and demanded they be kept out of Portland. The left has also made a point of branding violent riots as displays of peaceful protest.

Democrats throughout the nation have largely excused acts of violence happening in Portland and other communities across the nation. Last week, when asked about acts of violence against federal memorials, House Speaker Nancy Pelosi (D) cavalierly claimed that “people will do what they do.”

Cops are not stormtroopers.

Arrests are not kidnappings.

ANTIFA terrorists are not protestors.

Texas Sen. Ted Cruz (R) had a very different outlook, however. Over the weekend, Cruz slammed the lawlessness in Portland; the GOP senator also took aim at Democrats for excusing and defending the behavior.

The reactions to violence in Portland and other cities across the nation only demonstrate a deep divide regarding the perception of various events that America faces.

Violence in Portland comes as President Trump and members of his administration urge local leaders to get their cities in order at once.

What do you think about the lawless outbreaks that continue to plague Portland, Oregon? How do you feel about the various reactions to these occurrences? Let us know down below in the comments section.