Acts of violence continue to break out on the streets of major U.S. cities. Black Lives Matter folks and others are tearing down statues, setting monuments on fire, and even entering businesses to demand that individuals pledge allegiance to them.

In the midst of all this chaos, anarchy, and destruction, many Americans are wondering when elected officials will step in. After all, these leaders are elected in order to serve and protect folks from harm. This is why we have elections and vote. Still, in the eyes of many, elected leaders have dropped the ball; this goes for Republicans and Democrats alike. 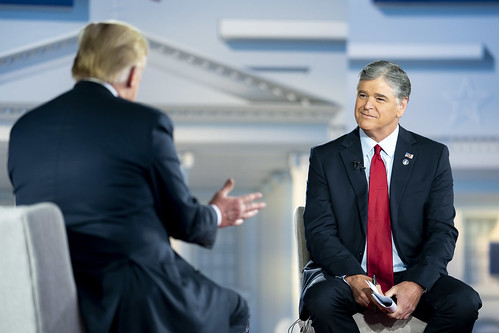 As a result of such, the GOP is facing new calls to take stronger action against those who commit crimes in the streets. According to Breitbart News, this matter came up during a town hall meeting involving President Trump and Fox News host Sean Hannity.

While speaking with Hannity yesterday night, the president noted the violence that broke out earlier this week.

The incident ultimately resulted in the assault of Wisconsin Sen. Tim Carpenter (D) after he attempted to film demonstrations. For weeks now, violent demonstrators have taken it upon themselves to riot, tear down monuments, and set certain items ablaze.

Patriot asks Trump how he will bring Law and Order to the streets!#Trump #trumptownhall #Hannity pic.twitter.com/kGjGLauejv

Trump criticized this behavior yesterday, stating that while Democrats “think it’s wonderful,” Republicans have a duty to crack down. Trump then continued, declaring that too many GOP members are “[sitting] back” and trying to engage in political correctness, rather than taking action.

Between a Rock and a Hard Place

Earlier this week, congressional Republicans attempted to bring forward a police reform bill. This bill would have disincentivized the use of chokeholds amongst other things, but Democrats quickly shut it down.

This led to claims of Democrats not wanting their GOP colleagues to gain credit for the legislation’s inception; others simply stated that Democrats are more interested in politicizing police work, rather than bringing about reform.

I’m frustrated that Democrats put politics ahead of our country. Real police reform is needed, but they didn’t even want to give it a shot. Americans must know that we hear them, and we must do the right thing. #JUSTICEAct #TwoWithTim pic.twitter.com/agxGeZjxgF

In the vast majority of cases, looting, rioting, and other forms of anarchy are present in cities run by Democrats. Unfortunately, left-wing leaders appear more interested in acquiescing to the mob, rather than restoring law, order, and safety to American streets.

In many ways, some Republicans feel as though their hands are tied.

Do you believe the GOP needs to take swifter action against lawlessness on the streets of our nation? Let us know what you propose in the comments section below.