Since the conclusion of the GOP National Convention, Republicans are wasting no time in pushing for Trump to win re-election. A significant part of this involves noting the very real differences between Trump and Biden.

As Americans face many battles from COVID-19 to economic struggles, uncertainties about whether or not schools will reopen and more, violence in certain American cities is a major issue. Mass riots began to break out following the Memorial Day death of George Floyd; additional riots have also popped up over the past week since the shooting of Jacob Blake. 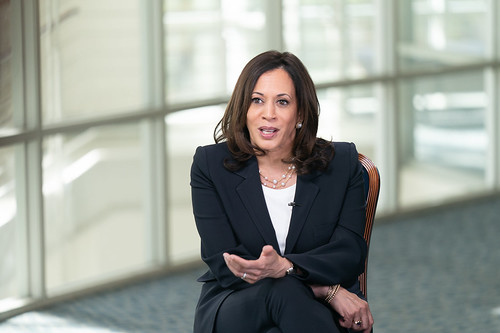 “Senator Harris Delivers Rebuttal to the” (CC BY-NC-SA 2.0) by Biden For President

Through all of this, Democrat nominee Joe Biden has refused to outrightly condemn acts of violence. As leftist activists loot communities, burn down businesses, and attack police officers, Democrats refer to their actions as “peaceful protests.”

Now, Republicans are tearing into Joe Biden for refusing to condemn these acts; GOP members furthermore maintain that it’s too late for the former vice president to shift positions, confirms Breitbart News.

During a Fox News interview on Friday, House Minority Leader Kevin McCarthy held nothing back when speaking out against Biden.

McCarthy noted the former vice president’s failure to mention acts of violence across America during his Democratic National Convention speech; the House Minority Leader also informed that individuals working for the Biden campaign have paid to bail violent agitators, looters, and rioters out of prison.

President Trump listens to the forgotten men and women of this nation. He has accomplished more in 4 years than Joe Biden has in 47 years of being in Washington. pic.twitter.com/s4ktt8h4SR

In light of these details, and Biden’s prior admission that he would defund law enforcement via “redirecting” police funding, McCarthy stated that it is now “too late” for the former vice president to alter his stance on crime and violence.

Finally, the House Minority Leader contrasted President Trump’s work to stop the riots in Kenosha with Biden’s passiveness towards the situation.

Where is Joe Biden?

Thus far, the former vice president appears to be back in his Delaware basement. While his running mate, Kamala Harris, delivered a rebuttal to President Trump’s RNC acceptance speech, Biden interviewed with CNN’s Anderson Cooper on Thursday.

Many Americans questioned why Biden wasn’t the one giving the rebuttal to his election opponent instead of having his vice-presidential candidate do the work. Others noted that Biden appeared to be reading from a script during his CNN interview, yet still struggled to clearly articulate himself.

Do you agree with House Minority Leader Kevin McCarthy? Is it too late for Joe Biden to shift gears on violence, riots, and crime? Let us known in the comments section below!