For quite some time now, scientist and public health “expert” Anthony Fauci has retained the national spotlight. Following the emergence of coronavirus, the White House took on Fauci as a member of the coronavirus task force.

To date, Fauci continues to give press interviews, sharing thoughts and predictions about the virus. 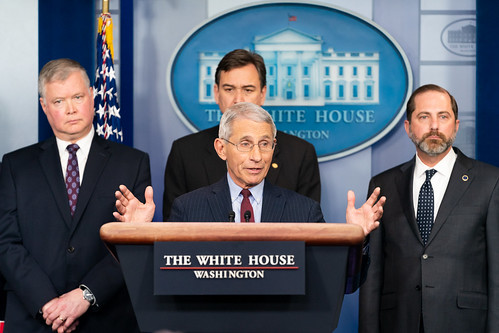 As more and more Americans pay attention to Fauci’s rhetoric, they’ve pointed out some concerns. Contradictions and flip-flopping are at the top of this list; earlier this year, Fauci stated that coronavirus was not a big deal and dismissed a need for face masks. Of course, he later changed his mind on both of these points, in addition to others.

Now, it appears as though Fauci is losing favor with certain White House officials. During this month alone, both President Trump and Trump aide Dan Scavino have openly noted disagreements and issues with Fauci’s responses to coronavirus, confirms Breitbart News.

The White House vs. Anthony Fauci?

Like many Americans, the president has pointed out that Fauci “made a lot of mistakes.” Trump also maintains that while he views the doctor as a “nice man,” he still disagrees with Fauci on specific matters.

In certain interviews, Fauci has taken it upon himself to contradict the president on multiple occasions. The coronavirus task force doctor maintains that the United States’ fight against COVID-19 is not “doing great” in comparison to other nations.

🔥🔥ARE THINGS WITH FAUCI FINALLY HEATING UP??🔥🔥🔥

However, Fauci’s various interviews are what prompted some backlash from Scavino. Days ago, the top Trump aide posted a cartoon from conservative artist Ben Garrison that depicts Fauci as a cold faucet running the economy, education system, etc. down the drain.

In doing this, Scavino also called out “Dr. Faucet” for “cowardly” disagreeing with “colleagues” via the press, rather than openly. The Trump aide then concluded his caption of the cartoon by stating that he’d see Fauci the next day.

Thus far, Fauci has not publically responded to Scavino.

Over the past several months, Fauci has received praise and accolades from many Americans who are left-leaning or opposed to Trump.

Fauci is a political hackjob what kind of a lunatic says we may never get back to normal without a vaccine? Why didnt Fauci push Obama to shutdown during H1N1 I’m curious?

Right-wingers, however, are not exactly in Fauci’s fan club. In fact, many conservatives have called for the firing of Fauci, citing his multiple contradictions and inconsistencies. Fauci’s prior claim that America may never return to normal without a vaccination for coronavirus also didn’t sit well with many Republicans who favor reopening.

Do you think Anthony Fauci is on his way out of the White House? Let us know down below in the comments section.