With less than 40 days left until Election Day, campaigning is far from over. Both Trump and Biden have their respective ads in different states, although the former vice president remains heavily reliant on these snippets, unlike Trump.

In yet another contrast with his election opponent, the 45th president continues to reach out to voters in person. This means traveling across the nation to participate in different rallies and campaign events. Furthermore, Vice President Mike Pence is also campaigning in person on Trump’s behalf, along with Trump’s adult children. 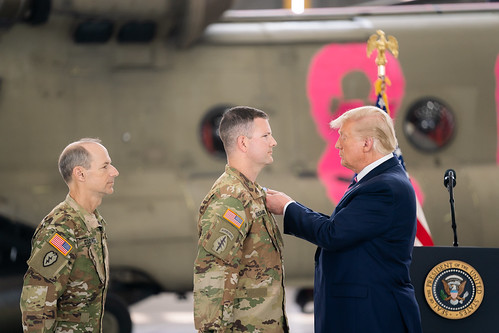 “President Trump in California” (Public Domain) by The White House

This week is going to be huge for the Trump campaign and for the 2020 presidential election as a whole. On Tuesday, Trump and Biden will go against one another on the debate stage with Fox News’ Chris Wallace as the moderator.

Later this week, the president will also continue his outreach to Midwest voters, confirms Fox News.

On Wednesday, September 30, the president is scheduled to host a rally with supporters at Minnesota’s Duluth International Airport. This week’s visit does not mark the first time that Trump has courted Midwest voters either; earlier this month, the president took time to campaign in the state, as did Joe Biden.

While engaging with Midwest voters, the 45th president is set to focus on critical issues; these matters regard American manufacturing, the protection of suburbia, and the merchandising of products made in the United States. Each of these issues is of unique value and significance to Americans who reside in the Midwest.

President @realDonaldTrump: In just three and a half years we have secured America's borders, fixed our disastrous trade deals and brought jobs back home! pic.twitter.com/eIQDYKAif2

Trump’s visit to Minnesota will come precisely one day after his debate against Joe Biden. The debate is sure to shake up the political scene, even with all that’s happening in the present SCOTUS battle and Trump’s recent nomination of Amy Coney Barrett.

Due to the timing of the president’s upcoming return to Minnesota, the debate aftermath and Barrett’s recent nomination are likely to come up during the rally.

Do you think President Trump will manage to successfully win over Midwest voters? Enlighten us with your predictions in the comments section below!