Yesterday officially marked President Trump’s return to the campaign trail. Trump (after a case of COVID-19, subsequent negative tests for the virus, and medical clearance) traveled to Sanford, Florida in order to hold a rally. 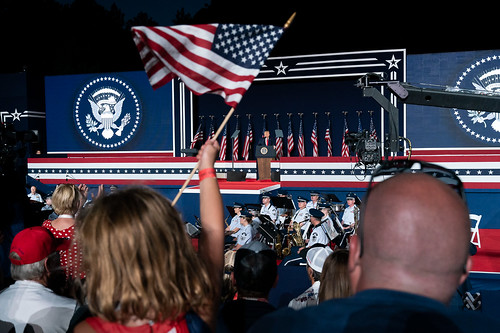 At this time, the president currently has a lead over Joe Biden in Florida, which is turning out to be a major battleground state. Weeks ago, the Sunshine State’s Republican Governor Ron DeSantis informed that Floridians would ultimately reject Biden’s policies of high taxes and economic shutdowns.

As Florida voters reject Biden, they appear to be embracing Trump. Yesterday’s rally went off without a hitch as Sanford folks were thrilled to see the president again, according to Breitbart News.

What to Know About Trump’s Sanford Rally

While Trump campaigned in Sanford yesterday, he covered a variety of issues that carry weight in this election. Some of those issues entailed the following: Second Amendment rights, Medicare, Social Security, freedom of speech, religious liberty, school choice, etc.

On multiple occasions, Trump also noted the contrasts between himself and Biden. The former vice president and his current running mate, Kamala Harris, remain supportive of mandatory buyback programs; Trump and Pence, on the other hand, vow to uphold Americans’ right to bear arms.

President @realDonaldTrump:"I did more in 47 months than Biden did in 47 years. Now, he is pushing the most far-left agenda ever put forward by a presidential nominee." pic.twitter.com/VSNkafvo9Y

Biden maintains that he’d close down the nation’s economy again without a second thought; Trump understands that jobs, livelihoods, and so much more cannot exist without an open and flourishing economy.

In Sanford, Trump was met with massive enthusiasm and energy from rally attendees. At one point, the president even tossed face masks into the crowd, much to the delight of his supporters.

A Bad Monday for Biden in Ohio

While President Trump had a great campaign rally in Sanford, the opposite is true of the time Biden spent in Ohio yesterday.

During a speech, Biden made several gaffes and appeared extremely low on energy. The Democrat tried to reference Utah Sen. Mitt Romney, yet forget his name, ultimately referring to Romney as the “the Mormon.”

Joe Biden insults the 56% of Americans who say they are better off today than they were 4 years ago, says they have bad memory and they should NOT vote for him. pic.twitter.com/8DnIOcfW9f

Another blunder arrived when Biden declared that he’s running for the U.S. Senate. The former vice president also didn’t help his case by telling Ohio voters to visit a non-existent site called “IWill.com/Ohio.”

Biden’s critics descended upon the multiple blunders, citing them as evidence of his deteriorating cognitive faculties.

What did you think about President Trump’s rally in Sanford Florida yesterday? Do you believe the president will manage to win the Sunshine State? Don’t be afraid to let us know in the comments section below!