As more and more Americans get unfiltered views of both Trump and Biden, the polls are beginning to reflect this.

During much of the time that Joe Biden remained huddled away in his basement, various surveys showed him leading President Trump. However, riots, shootings, and different displays of social unrest forced the former vice president to get back into the real world. 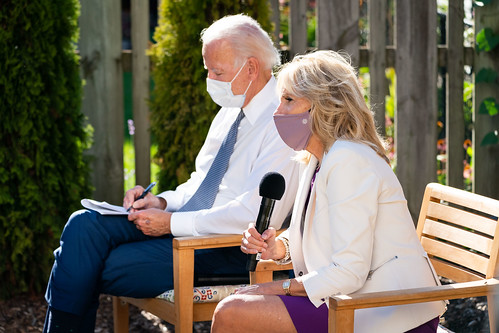 “Conversation Regarding School Reopening” (CC BY-NC-SA 2.0) by Biden For President

Since Biden is no longer cowering behind his team and the filters of virtual campaigning, the American people are getting a real look at him; it turns out that many folks aren’t liking what they see.

This could explain why President Trump is now leading Biden in a new Texas poll, reports Breitbart News.

What to Know About Trump vs. Biden in Texas

The former vice president’s team has previously flirted with the idea of being able to win Texas. However, the deeply conservative state doesn’t look like it’ll be flipping blue anytime soon.

A new survey from Dallas Morning News/UT-Tyler shows that Trump leads Biden by two points. While the president enjoys 48% support in the Lone Star State, this latest poll marks a pattern.

As Trump gradually increases his standing, Biden is progressively losing ground. The 45th president is not only leading Biden in Texas, but also in critical battleground states like Florida, South Carolina, etc.

Why Democrats Want to Win Texas

Decades have passed since the Lone Star State voted for a Democrat in a general election; nevertheless, Democrats remain determined and hopeful that they’ll win the collective Texas vote in 2020.

Actually pulling this off would pose a major threat to the Trump campaign, Democrats maintain; however, the odds are less than slim to none. The policies that Biden has chosen to champion simply don’t fly with the many conservatives and Republicans who reside in Texas.

President @realDonaldTrump is fighting for the AMERICAN WORKER!pic.twitter.com/OV9WzzLzr6

By contrast, the president’s policies align with the morale and policies shared by many Texans. This is why Trump won Texas in 2016 and he’s expected to do so again this year. Some Democrats have suggested that Kamala Harris’ position as Biden’s running mate might be enough to flip Texas blue, although, the left shouldn’t count on this.

What do you think about the latest poll showing President Trump’s lead on Biden in Texas? Do you believe Democrats even have a chance of flipping the Lone Star State blue? Enlighten us down below in the comments section.