On Friday morning, the American people woke up to news that President Trump and the first lady both tested positive for coronavirus. The diagnoses arrived after White House staffer Hope Hicks also tested positive following displays of various virus symptoms.

Reactions to the news that Trump contracted COVID-19 varied. Many conservatives and even some of the president’s detractors wished him and the first lady a speedy recovery. 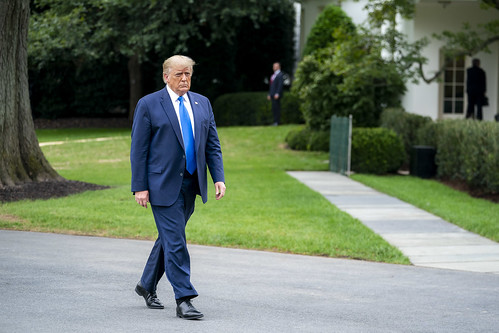 However, others didn’t hesitate to rip the president, wish death upon him, and even begin talk about invoking the 25th Amendment. Certain folks even questioned whether or not America’s national security is now in peril due to Trump’s positive COVID-19 test results.

Late Friday afternoon, the story developed even further when news broke that President Trump was being moved to Walter Reed Hospital for precautionary reasons, per Breitbart News.

What to Know About Trump’s Transfer to Walter Reed Hospital

On Friday, Kayleigh McEnany, the White House press secretary, announced President Trump’s transfer to Walter Reed Hospital. McEnany explained that while the president is feeling well and only experiencing mild coronavirus symptoms, the transfer is happening for the purpose of “an abundance of caution” and following doctors’ reccomendations.

Shortly after the development, President Trump himself issued a statement on the matter. In a video posted to his social media accounts, the commander-in-chief thanked Americans for their support and confirmed his transfer to Walter Reed Hospital. Trump then explained that while he believes he’s doing well, the transfer is happening to ensure that “things work out.”

Within minutes of the video’s posting, it garnered millions of views on various social media platforms. Shortly after news of the transfer, Americans also learned that several White House reporters have also tested positive for coronavirus.

Potential Impacts on the 2020 Presidential Election

Many Americans are left wondering how the president’s confirmed diagnosis of COVID-19 will impact the 2020 election.

On Friday, the nation learned that Biden’s campaign plans to remove negative attack ads against President Trump. An aide to Biden reportedly stated that ads condemning Trump would conflict with the former vice president’s earlier well wishes to Trump and his family.

Jill and I send our thoughts to President Trump and First Lady Melania Trump for a swift recovery. We will continue to pray for the health and safety of the president and his family.

Conspiracy theories have arisen as well. Some folks question whether or not Trump will be on the voting ballots in certain states; however, there is no merit to the notion that the president wouldn’t be on the ballot as a candidate seeking office.

Do you think President Trump will quickly recover from coronavirus? How do you think positive tests within the president’s inner circle will impact the nation? Let us know down below in the comments section!