Biden has continued to dig himself into a deeper and deeper political hole.

To date, some of the former vice president’s latest attacks against Trump pertain to the latter’s policies, management of coronavirus, and more. It’s important to note that these attacks are a diversion from Biden’s latest blunder; last week, the presumptive Democrat nominee claimed that black Americans who are thinking about supporting Trump “ain’t black.” 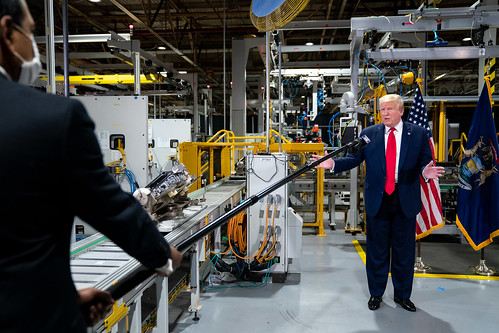 “President Trump in Michigan” (Public Domain) by The White House

On Sunday, President Trump pushed back against the onslaught from Biden, while speaking with WJLA. During the interview, Trump stated that the presumptive Democrat nominee “doesn’t know he’s alive” and is plagued with a series of other issues.

Fox News furthermore reports Trump’s comparison between Biden and a “glass of water.”

The Latest on Trump vs. Biden

While engaging in the WJLA interview yesterday, the president was asked to share a complimentary quality that he believes Biden possesses. However, it’s quite clear that Trump doesn’t believe the former vice president has many strong suits.

The president stated that while he would ordinarily cite experience as Biden’s strong suit, the former vice president can’t “[remember] what he did yesterday.” After noting that Biden suffers from “many weak points,” Trump vocalized what many Americans believe: the presumptive Democrat nominee lacks the mental fiber to lead the nation.

After detailing Biden’s issues with China and Russia, the president returned his focus to Biden’s cognitive decline. Trump declared that the presumptive Democrat nominee “doesn’t know he’s alive” and lacks the capability to answer simple questions.

Towards the end of the president’s assessment of Biden, he told WJLA that he’s “never seen anything like” someone who suffers from the former vice president’s vast shortcomings.

What do you think about President Trump’s statements about Joe Biden? Do you believe the former vice president still has proficient cognitive abilities? Don’t hold back in the comments section below!