President Trump and House Speaker Nancy Pelosi have not really had the best relationship. Despite the Speaker’s claims that she “prays for the president,” Pelosi has repeatedly attacked Trump’s presidency, administration, and as of late, his decision to take hydroxychloroquine.

On Monday, the 45th president informed Americans that he is taking the anti-malaria drug in order to reduce his chances of catching COVID-19. Likewise, Trump also confirmed that one of his doctors has approved his consumption of hydroxychloroquine. 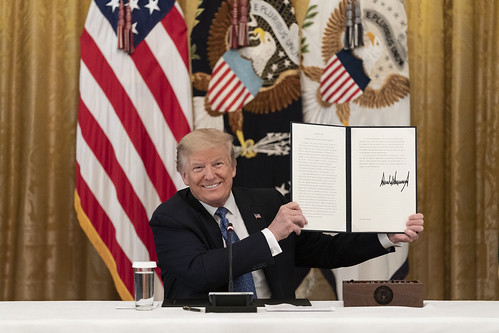 In spite of Trump having the OK from a physician, leftists lost their minds over learning that the president is consuming the drug. This led to Democrats branding Trump’s decision to ingest hydroxychloroquine as reckless and dangerous; although, Speaker Pelosi’s personal attacks against the president went even further, according to Breitbart News.

Trump vs. Pelosi: The Latest Edition

During a sit-down with CNN, the House Speaker professed that someone in President Trump’s age group and “morbidly obese” weight group should not be consuming hydroxychloroquine.

Our speaker of the house, @SpeakerPelosi calls our President ”morbidly obese” on national television as a sneering @andersoncooper looks on. This really happened. pic.twitter.com/UmQWsOri1D

To America’s knowledge, the Speaker is not a physician, and furthermore, her assessment regarding Trump’s ingestion of the anti-malaria drug runs contrary to the very doctor who approved hydroxychloroquine for the president. Since making these comments, Pelosi has faced immense backlash, notably from conservatives.

On Tuesday, Trump brushed off Pelosi’s statements, branding her as a “sick woman” who suffers from “mental problems.” The president also explained that he doesn’t respond to the House Speaker because she is a “waste of time.”

Trump on Pelosi Calling Him ‘Morbidly Obese’: ‘I Don’t Respond to Her … She Is a Waste of Time’ pic.twitter.com/nAppvHX8Ll

When asked about this response from Trump, Pelosi claimed she didn’t know that the president would be “so sensitive.” The Speaker of the House also stated that she didn’t want to waste time on Trump’s “distraction,” despite her being the one to first begin this back-and-forth.

What do you think about the latest blows between President Trump and the House Speaker? Why do you believe Democrats are losing their minds over Trump’s doctor-approved consumption of hydroxychloroquine? Let us know in the comments section below!