With eight days remaining until November 3, the 2020 presidential election is down to the wire. Both presidential candidates have one week and one day left to make their cases to the American people. 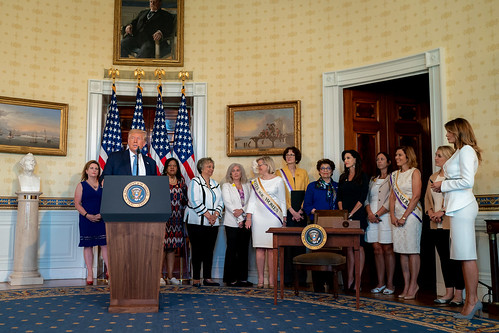 Both Trump and Pence take their jobs seriously and believe in earning another four years in the White House.

As the two members of the Republican presidential ticket campaign, Trump and Pence are talking about what they have to offer the nation, while continuously warning about the dangers of Joe Biden and Kamala Harris in office, reports Fox News.

On Sunday, President Trump spent time campaigning and rallying with supporters in Maine and New Hampshire.

While in Maine, the president spoke with some of his supporters at an apple orchard; he also signed autographs (and a pumpkin)! Videos and images of Maine Trump supporters showed a packed and enthusiastic crowd that was more than eager to see the president.

Trump talking to supporters and signing autographs at the Maine orchard.

No apple picking yet. pic.twitter.com/Fdq8TLQaT4

A similar story rings true in New Hampshire. Yesterday, the president held a rally in Manchester and spoke about a series of matters. The resurgence of the U.S. economy, dangers of shutting down again, and confirmation of Amy Coney Barrett are just a few examples.

This past weekend, the vice president spent time in Kinston, North Carolina to hold a MAGA rally of his own.

While addressing Trump supporters, Pence spoke about the ways that the Trump administration has reduced taxes for American families. The elimination of the estate tax for farm families is one instance noted by Pence.

Vice President @Mike_Pence: We repealed the estate tax for nearly every family farm in America, death is no longer a taxable event pic.twitter.com/yJrNMlY84S

In addition to urging North Carolinians to get out and vote, the vice president explained that if Biden wins, he’ll raise American families’ taxes by over four million dollars. Biden, himself, has repeatedly vowed to repeal the Trump tax cuts that so many families and businesses have benefited from.

Do you believe that Donald Trump and Mike Pence will win the 2020 presidential election? Have you attended any MAGA events or voted yet? Be sure to let us know what you think the election outcome will look like down below in the comments section.