On Friday, Americans learned that President Trump would go to Walter Reed Hospital after taking two tests which came back positive for COVID-19. The president stayed in the medical facility over the weekend where he received treatment and care from the medical professionals.

Following Trump’s positive diagnosis and transfer to Walter Reed, an outpour of support ensued. Patriotic Americans camped outside of the hospital, holding up pro-Trump signs and letting the president know that they care. 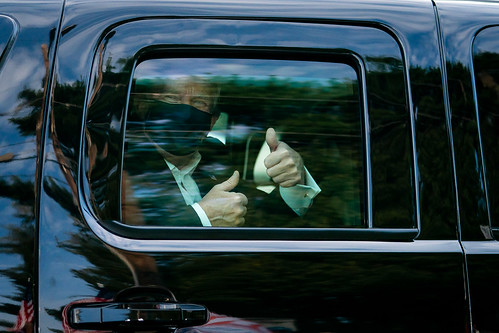 On Monday, President Trump was given the green light to leave Walter Reed Hospital and return to the White House. After doing so, Trump shared an important message with the nation about coronavirus after his own personal experience with it, as noted by Breitbart News.

The Real Truth About COVID-19

After returning to the White House yesterday evening, the president explained that his positive diagnosis of COVID-19 caused him to learn quite a bit. Despite the fearmongering and panic that is perpetuated by the left and the mainstream media, Trump professed that Americans shouldn’t allow this virus to “dominate” them.

Per the CDC, the recovery rates for COVID-19 range between 94.6% and 99.997%. Variations between these percentages depend upon which age category positive individuals fall into; however, it is not a stretch to say that most folks who come down with coronavirus are more likely than not to beat it.

In additional remarks to the country, President Trump also explained that the virus shouldn’t take over the lives of the American people. Not long after this point came Trump’s statement about the importance of him leading and standing “out front” as president of the United States.

During the president’s hospitalization, there were questions about the future of the Trump 2020 campaign…and by extension, the 2020 election.

On Monday, the nation learned that Pence and Harris will stand 13 feet away from each other; Harris, also, will apparently have plexiglass surrounding her during the 90 minutes that she’s on the debate stage.

Are you glad that President Trump is back in the White House? Also, what did you think about his remarks on coronavirus? Inform us of your thoughts down below in the comments section.