Since recovering from coronavirus, President Trump has taken a hands-on approach towards getting back on the campaign trail.

Yesterday, the 45th president campaigned in Iowa. With an energetic crowd before him, Trump talked about healthcare, jobs, and other important issues that impact voters. Later today, the president will also attend a fundraising event in North Carolina before traveling to Florida for a town hall event in Miami. 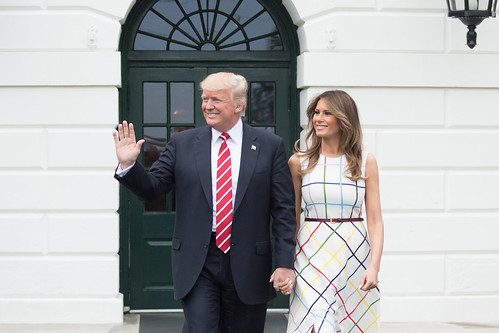 “The 2017 Congressional Picnic” (Public Domain) by The White House

Today would have marked the second presidential debate for Trump and Biden; however, the Commission on Presidential Debates decided that terminating the event altogether was the best way to give Biden’s campaign a lifeline.

Tomorrow, President Trump will travel to Georgia to rally with supporters in Macon, according to Washington Examiner.

A Closer Look at Tomorrow’s Trump Rally in Georgia

The president’s visit to the Peach State tomorrow will come after visits from his children, Ivanka Trump and Donald Trump Jr., earlier this week. Within recent weeks, Eric Trump also traveled to Georgia to campaign with Republican Governor Brian Kemp and Evangelical conservatives.

Tomorrow, beginning at 7:00 PM EST, the president will address supporters from Macon’s Middle Georgia Regional Airport. While Georgia is shaping up to be a battleground state, it’s  one that Trump won in the 2016 election; moreover, the Trump campaign has dismissed Democrat-fueled narratives that tomorrrow’s Trump rally is motivated by fears of Biden winning Georgia.

Samantha Zager, a spokeswoman for the Trump 2020 campaign, quickly set the record straight. Zager explained that the president values “active connections” with voters across the nation and remains sure that he will win the Peach State yet again.

Likewise, the Trump 2020 spokeswoman also explained that the Macon rally could boost the president in Georgia, seeing as early voting as already started in the state.

As early voting kicks off in states like Georgia, Texas, North Carolina, etc., the president is urging voters to get out there and cast their ballots. Thus far, people seem to be heeding the advice.

"I ran for President because I could not sit back any longer & watch the terrible injustices being done to the American people…I cannot sit idly by & watch career politicians like Joe Biden continue bleeding this country dry."—@realDonaldTrump in Iowa pic.twitter.com/AznvkG7D7J

Many early voting spots are reporting long lines of record proportions. With plenty of early voting time left between now and the election, Americans can expect to see more and more of the president on the campaign trails.

Will you be going to or live streaming President Trump’s rally in Macon, Georgia? Have you already cast your vote in the early voting process? Let us know in the comments section below!