Trump Travels to Michigan for Rally with Supporters

The 2020 presidential election remains on and very much alive. General election season is here and both President Trump and Joe Biden are making their cases for why they should win this year’s election.

While Biden campaigns virtually or speaks in public but without an audience, President Trump is doing precisely the opposite. Trump is traveling across the nation, getting out in the field, and going to different arenas to host rallies. 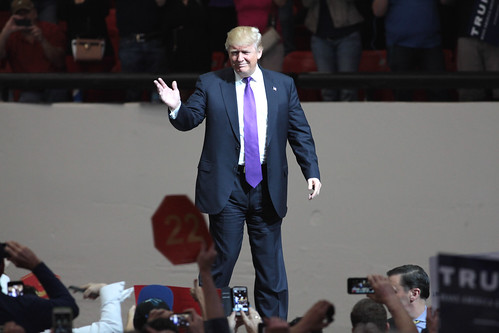 Yesterday, the president spent time in Michigan to campaign with supporters. Breitbart News confirms that pro-Trump Michiganders greeted the president in huge numbers and with unmatched enthusiasm.

A Closer Look at the Latest Michigan Trump Rally

On Thursday, Trump talked about a series of relevant matters during his time in Freeland, Michigan.

One important pointer revolved around love of country and the hypocrisy of certain Democrat leaders. The president specifically called out Michigan Governor Gretchen Whitmer; despite ordering various shutdowns and restrictions of gatherings, the Michigan governor’s own family has attempted to flout these rules.

President @realDonaldTrump on @gretchenwhitmer: She is a liberal hypocrite pic.twitter.com/VOyQig63fY

Trump furthermore addressed the perils of “endless wars” along with immigration reform, tariffs on China, and dangerous policies that Biden has supported over his decades-long political career.

The president also discussed the importance of jobs. Trump explained that if Governor Whitmer were to open things up, Michiganders would have gained an abundance of new jobs; Trump also didn’t hesitate to hold Whitmer’s feet to the fire for the ways in which her policies have damaged small businesses.

The goal of winning Michigan in 2020 served as a significant factor in the president’s visit yesterday.

Not only did Trump address current events in the nation, but he also talked about why Michiganders should vote for Republicans. The president explained that Republicans have and will continue to prioritize employment opportunities, the security of U.S. communities, and a “limitless” future for this country’s citizens.

President @realDonaldTrump: “A vote for Republicans is a vote for safe communities, great jobs, and a limitless future for all Americans.” pic.twitter.com/v1pcHtnMvs

Each of these priorities conflict with Democrats who have argued in favor of keeping businesses closed, defunding the police, and increasing the role of government. Despite polls showing that Trump is behind in Michigan, the turnout for his rally in Freeland spoke volumes.

Some Americans have even suggested that the polls are being intentionally manipulated in order to downplay just how much support President Trump actually has.

What did you think about President Trump’s rally in Freeland, Michigan yesterday? Enlighten us down below in the comments section.