Earlier this year, the country witnessed an outbreak of violent riots in Kenosha, Wisconsin, after left-wing activists disagreed with an encounter between police officers and a black man.

Rioting, looting, and torching communities has now become par-for-the-course when the radical left is unhappy or failing to get their way. Americans saw it in Kenosha and now the exact same thing is happening in Wauwatosa, Wisconsin. 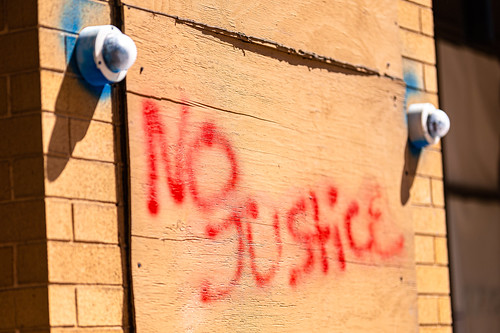 The riots have been going on for nearly five nights in a row; Americans should also be aware that this violence is happening because a police officer who killed Alvin Cole via shooting did not receive an indictment from the grand jury, per Breitbart News.

A Closer Look at Wauwatosa Riots

Yesterday night’s riots resulted in 28 individuals being taken into custody by law enforcement. On Saturday evening and over the course of three nights prior, demonstrations took it upon themselves to block traffic, loot small businesses, trap drivers in their cars, break windows of people’s homes, and more.

The consecutive nights of violence resulted in a 7:00 PM curfew for Wauwatosa residents, but of course, the rioters ignored this curfew. Police officers have also been put in notable amounts of danger since the inception of these riots.

Rioters in Wauwatosa, WI were caught on video smashing windows of people’s homes. This is where innocent families sleep.

In no sane world can this be considered an act of "peaceful protest." This is not what the 1st Amendment was written to protect.pic.twitter.com/4DRiNCKirV

Officers documented that demonstrators threw bricks, bottles, rocks, and other dangerous objects at law enforcement; one police officer even had a gun pointed at them by a rioter. The unhinged demonstrators appear to get angrier when police attempt to intervene against the rioting for the sake of the community’s safety.

In 2020, Americans have witnessed a recurring pattern of violence when Black Lives Matter and other far-left activists fail to get what they want. The destruction of communities continues to have lingering, negative impacts; yet, only recently have Democrats begun to offer soft condemnations of violence.

The violence taking place in cities like Wauwatosa is why so many Americans are supporting President Trump, a law and order leader. It could also explain why the president has received such a plethora of endorsements from a variety of police organizations and law enforcement groups.

Violence from Black Lives Matter paints a clear contrast between how Democrats feel about law enforcement and how Trump feels. The president remains committed to upholding law and order; this means making it easier and not harder for police officers to do their jobs.

Situations happening in localities like Wauwatosa, Minneapolis, Kenosha, etc., will also worsen if police lose funding as the left is pushing for.

What do you think about the back-to-back nights of consecutive violence in Wauwatosa, Wisconsin? How long will this be allowed to continue? We want to know your thoughts on the matter in the comments section below!