The left-wing remains unhappy with the fact that President Trump chose to nominate Amy Coney Barrett to fill the currently vacant seat within the Supreme Court. Since the inception of Barrett’s nomination, Democrats were against it. The left put out a series of misleading claims about Barrett’s family, religion, and what to expect if she is confirmed. 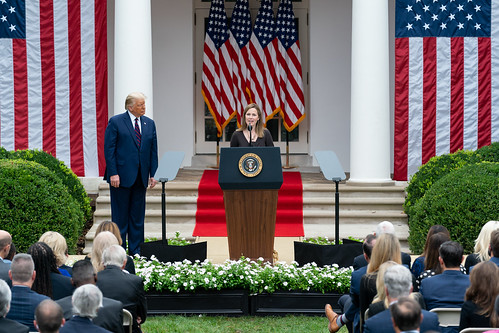 Last week, proceedings for Barrett’s confirmation began in the Senate; however, Democrats still aren’t hiding their aversion to the Supreme Court nominee.

On Saturday, the liberal Women’s March protesters appeared in D.C. to voice their opposition towards Barrett’s nomination and impending confirmation, per Breitbart News.

What to Know About Yesterday’s Liberal Women’s March

Participants in the liberal Women’s March express outrage towards both the nomination of Amy Coney Barrett and the fact that Trump remains president. Leftists at the display in Washington D.C. held up various anti-Trump and anti-Barrett signage. Likewise, protesters were seen wearing Handmaid’s Tale outfits.

In a statement, the left-wing Women’s March explained the purpose of yesterday’s demonstrations. By their own admission, the group sought to send an “unmistakable message” about their loathing of the president and his Supreme Court nominee.

Marchers wore face masks during the event and called for the removal of Trump and Pence from office. Not long after the liberal Women’s March started in D.C., pictures and videos of the display quickly made their way onto different social media platforms.

A Rise in Social Demonstrations

As the 2020 presidential election gets closer, the American people can expect to see more and more social demonstrations.

Numerous folks across the nation view this year’s election as one of the most important elections in American history. Furthermore, emotions are intense, something which COVID-19 and the subsequent responses have contributed to.

Already, left-wing activists have threatened riots and social unrest if the 2020 presidential election results in Trump winning a second term. The president, however, maintains that he will not stand for violence. As such, Trump has warned that if he needs to send in the military to quell violence on Election Day, he will do so.

The liberal Women’s March has gained infamy for the promotion of left-wing policies and opposition against Trump. During last week’s confirmation hearing for Amy Coney Barrett, protesters also stood in D.C., dressed in Handmaid’s Tale outfits.

What did you think about yesterday’s display from the leftist Women’s March? Be sure to let us know where you stand in the comments section below!